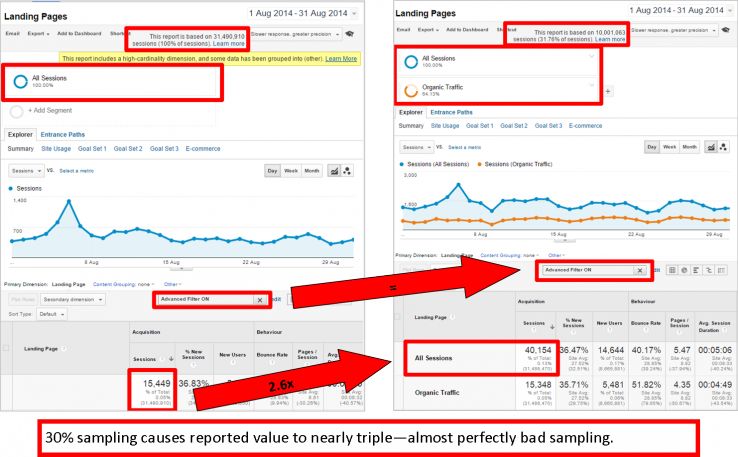 Problems in Google Analytics are causing you to get bad data, misunderstand reports and draw wrong conclusions. Many of these are not your fault, they’re due to settings, bugs and the configuration of Google Analytics. There are also some that are just easy to misunderstand and that I’ve seen trip up even experienced consultants.

Read on to learn what you need to look for.

My team and I have recently seen some strange sampling issues/bugs in Google Analytics. We were looking at the landing page report with an advanced filter. All sessions were reported around 15k. Applying an advanced segment to the same report, all sessions were inflated by about 2.6x to 40k. See the image below:

We’ve seen this in other reports too, but we’re still unsure why this is happening. We’ve reported it to Google and they think it is a bug. If anyone else knows why this is happening, I’d be interested in hearing why in the comments below. For now, all we can do is be aware that this can happen.

Funnel visualisation is one of the reports that people love to use. It’s great in theory, looks good and at first glance tells you lots of the things you want to know.

The problem is, it’s often just wrong. My number one tip for the funnel visualisation report is this: don’t use it. Seriously. For three reasons:

I’m only going to cover two of the inaccuracies/assumptions here; for more details and for a comprehensive overview of funnel visualisation and goal flow I recommend reading this.

The whole point in creating a funnel is to see exactly where people go, and how many people move through the funnel steps. Unfortunately, that’s very hard to see in Google Analytics. The section below, taken from the support article, explains the problem:

The longer the funnel, the more unusable this becomes because you have no idea which pages users really visited and which Google Analytics is just backfilling. All the funnel really shows is the entrance and exit point.

The order that the steps are taken in also isn’t taken into consideration. This makes the entry and exit pages also unusable. To use Google’s example:

The Funnel Visualisation report would show an entrance from /xyz to /step2, a continuation to /step3 and an exit from /step3 to /abc.”

We actually know that the entrance page was /page3 not /page2 and that the exit page was /step2 not /step3.

While I can see some of the logic behind these decisions, I would be very reluctant to draw any conclusions from the data. For most funnel analysis needs, I like

That’s all folks. I hope you’ll be able to make more informed decisions from your data after reading this. If anyone knows any more details on any of the items on the list I’d be interested in hearing your thoughts in the comments.

From:: Avoid Common Google Analytics Bugs and Misunderstandings that Lead to Bad Data