Google’s Physical Web and its Impact on Search

Google’s Physical Web and its Impact on Search 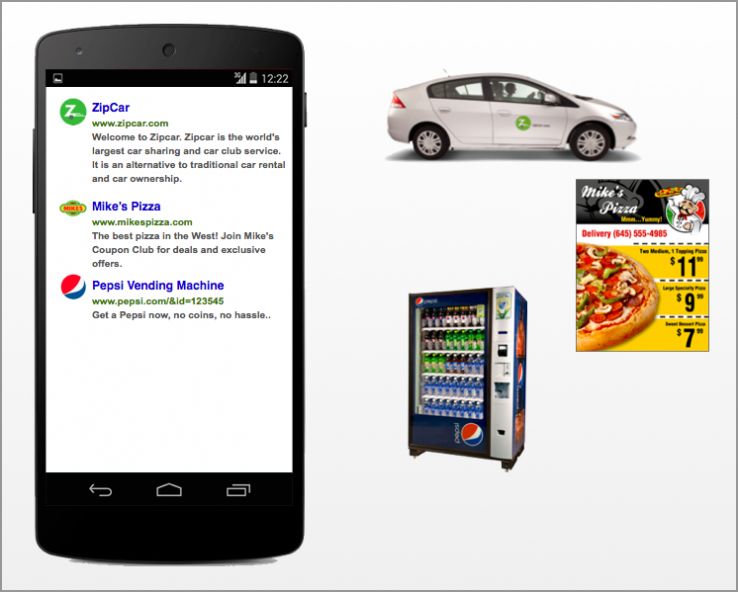 In early October, Google announced a new project called ”
The Physical Web,” which they explain like this:

The Physical Web is an approach to unleash the core superpower of the web: interaction on demand. People should be able to walk up to any smart device – a vending machine, a poster, a toy, a bus stop, a rental car – and not have to download an app first. Everything should be just a tap away.

At the moment this is an experimental project which is designed to promote establishing an open standard by which this mechanism could work. The two key elements of this initiative are:

URLs: The project proposes that all ‘smart devices’ should advertise a URL by which you can interact with that device. The device broadcasts its URL to anyone in the vicinity, who can detect it via their smartphone (with the eventual goal being this functionality is built into the smart phone operating systems rather than needing third-party apps).


Beacons: Not well known until Apple recently jumped on the bandwagon announcing iBeacons, beacon technology has been around for a couple of years now. Using a streamlined sibling of Bluetooth, called Bluetooth Low Energy (no pairing, range of ~70 metres / ~230 feet) it allows smartphones to detect the presence of nearby beacons and their approximate distance. Until now they’ve mostly been used to ‘hyper-local’ location based applications (check this blog post of mine for some thoughts on how this might impact SEO).

The project proposes adapting and augmenting the signal that Beacons send out to include a URL by which nearby users might interact with a smart device.

This post is about looking to the future at ways this could potentially impact search. It isn’t likely that any serious impact will happen within the next 18 months, and it is hard to predict exactly how things will pan out, but this post is designed to prompt you to think about things proactively.

To help wrap your head around this, lets look at a few examples of possible uses:

Bus times: This is one of the examples Google gives, where you walk up to a bus stop and on detecting the smart device embedded into the stop your phone allows you to pull the latest bus times and travel info.

Item finder: Imagine when you go to the store looking for a specific item. You could pull out your phone and check stock of the item, as well as being directed to the specific part of the store where you can find it.

Check in: Combined with using URLs that are only accessible on local wifi / intranet, you could make a flexible and consistent check in mechanism for people in a variety of situations.

I’m sure there are many many more applications that are yet to be thought up. One thing to notice is that there is no reason you can’t bookmark these advertised URLs and use them elsewhere, so you can’t be sure that someone accessing the URL is actually by the device in question. You can get some of the way there by using URLs that are only accessible within a certain network, but that isn’t going to be a general solution.

Also, note that these URLs don’t need to be constrained to just website URLs; they could just as well be
deep links into apps which you might have installed.

Parallels to the web and ranking

There are some obvious parallels to the web (which is likely why Google named it the way they did). There will be many smart devices which will map to URLs which anyone can go to. A corollary of this is that there will be similar issues to those we see in search engines today. Google already identified one such issue—ranking—on the page for the project:

At first, the nearby smart devices will be small, but if we’re successful, there will be many to choose from and that raises an important UX issue. This is where ranking comes in. Today, we are perfectly happy typing “tennis” into a search engine and getting millions of results back, we trust that the first 10 are the best ones. The same applies here. The phone agent can sort by both signal strength as well as personal preference and history, among many other possible factors. Clearly there is lots of work to be done here.

So there is immediately a parallel between with Google’s role on the world wide web and their potential role on this new physical web; there is a suggestion here that someone needs to rank beacons if they become so numerous that our phones or wearable devices are often picking up a variety of beacons.

Google proposes proximity as the primary measure of ranking, but the proximity range of BLE technology is very imprecise, so I imagine in dense urban areas that just using proximity won’t be sufficient. Furthermore, given the beacons are cheap (in bulk, $5 per piece will get you standalone beacons with a year-long battery) I imagine there could be “smart device spam.”

At that point, you need some sort of ranking mechanism and that will inevitably lead to people trying to optimise (be it manipulative or a more white-hat approach).
However, I don’t think that will be the sole impact on search. There are several other possible outcomes.

Further impacts on the search industry

Imagine that these smart devices became fairly widespread and were constantly advertising information to anyone nearby with a smart devices. I imagine, in a similar vein to schema.org actions which provide a standard way for websites to describe what they enable someone to do (“affordances,” for the academics), we could establish similar semantic standards for smart devices enabling them to advertise what services/goods they provide.

Now imagine you are looking for a specific product or service, which you want as quickly as possible (e.g “I need to pick up a charger for my phone,” or “I need to charge my phone on the move”). You could imagine that Google or some other search engine will have mapped these smart devices. If the above section was about “ranking,” then this is about “indexing.”

You could even imagine they could keep track of what is in stock at each of these places, enabling “environment-aware” searches. How might this work? Users in the vicinity whose devices have picked up the beacons, and read their (standardised) list of services could then record this into Google’s index. It sounds like a strange paradigm, but it is exactly how Google’s app indexing methodology works.

Context is becoming increasingly important for all searches that we do. Beyond your search phrase, Google look at what device you are on, where you are, what you have recently searched for, who you know, and quite a bit more. It makes our search experiences significantly better, and we should expect that they are going to continue to try to refine their understanding of our context ever more.

It is not hard to see that knowing what beacons people are near adds various facets of context. It can help refine location even further, giving indications to the environment you are in, what you are doing, and even what you might be looking for.

I’ve spoken a little bit about passive searches before; this is when Google runs searches for you based entirely off your context with no explicit search. Google Now is currently the embodiment of this technology, but I expect we’ll see it become more and more 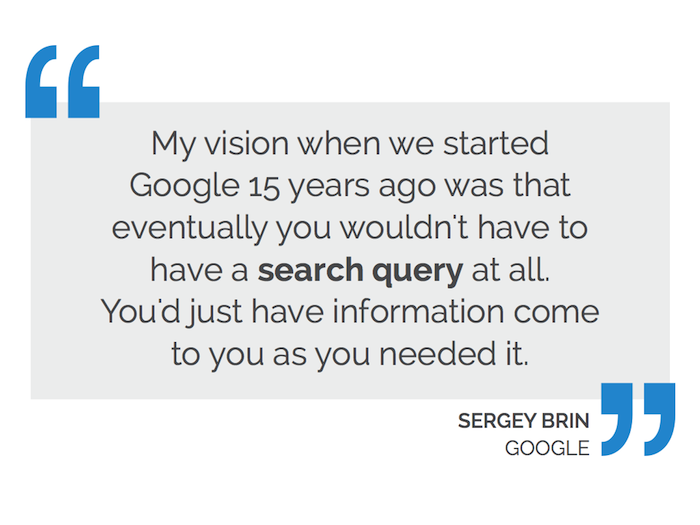 I believe could even see see a more explicit element of this become a reality, with the rise of conversational search. Conversational search is already at a point where a search queries can have persistent aspects (“How old is Tom Cruise?”, then “How tall is he?” – the pronoun ‘he’ refers back to previous search). I expect we’ll see this expand more into multi-stage searches (“Sushi restaurant within 10 minutes of here.”, and then “Just those with 4 stars or more”).

So, I could easily imagine that these elements combine with “environment-aware” searches (whether they are powered in the fashion I described above or not) to enable multi-stage searches that result in explicit passive searches. For example, “nearby shops with iPhone 6 cables in stock,” to which Google fails to find a suitable result (“there are no suitable shops nearby”) and you might then answer “let me know when there is.”

It seems certain that embedded smart devices of some sort are coming, and this project from Google looks like a strong candidate to establish a standard. With the rise of smart devices, whichever form they end up taking and standard they end up using, it is certain this is going to impact the way people interact with their environments and use their smart phones and wearables.

It is hard to believe this won’t also have a heavy impact upon marketing and business. What remains less clear is the scale of impact that this will have on SEO. Hopefully this post has got your brain going a bit so as and industry, we can start to prepare ourselves for the rise of smart devices.

I’d love to hear in the comments what other ideas people have and how you guys think this stuff might affect us.

From:: Google’s Physical Web and its Impact on Search