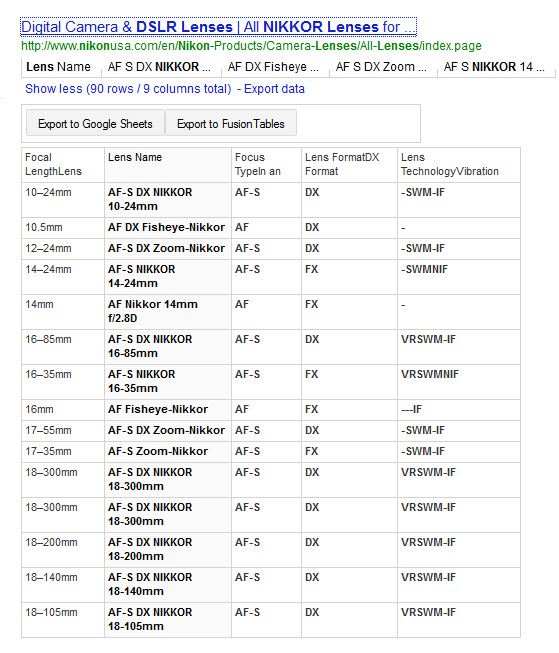 An article that came out at the beginning of 2015 was intended to (quietly) let people know about what Google had been doing to offer a new form of search results called Table Search. The article was titled
Applying WebTables in Practice (pdf).

It tells us about an initiative that Google’s structured data team embarked upon, when they started the WebTables project in the second half of the 2000s, which involved them releasing the following paper:

WebTables: Exploring the Power of Tables on the Web (pdf)

It got some nice press in the paper
Structured Data on the Web (pdf).

What is Table Search?

There are many pages on the Web that are filled with data in the form of tables. It’s possible that if you weren’t paying attention you may have missed
Google Table Search entirely—it hasn’t gotten a lot of press as far as I can tell. If you include tabular data on the pages of your site, though, you may be able to find tables from your site included in the results from a query in Google Table Search.

Imagine that I am looking to buy a new camera lens, except I’m not sure which one to purchase. I’ve heard good things about Nikon lenses, so I go to Table Search and look for [
single lens dslr nikon]. The first table returned gives me some choices to compare different lenses:

One of the interesting things to grow out of Table Search capability from Google is the structured snippet, a search result that is a combination of query results and tabular data results, as described by Google in their blog post
Introducing Structured Snippets, now a part of Google Web Search.

For example, this result involving a search for [superman] includes facts from a Wikipedia table about the character: 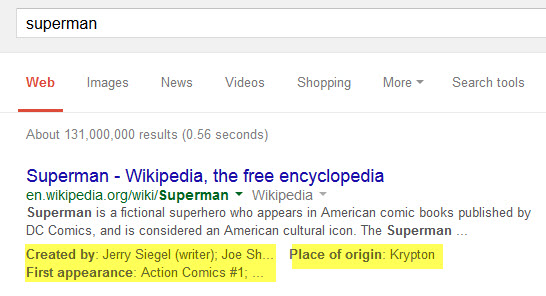 Those extra facts come from the table associated with a query on Superman that shows tabular data about the character: 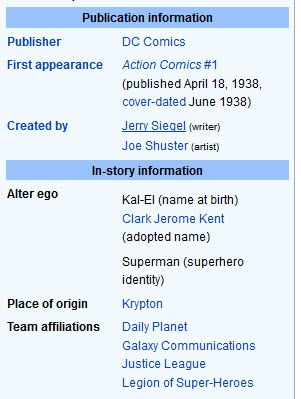 We can see Google working in structured snippets elsewhere, e.g., in presenting snippets from Twitter, like from the following profile: 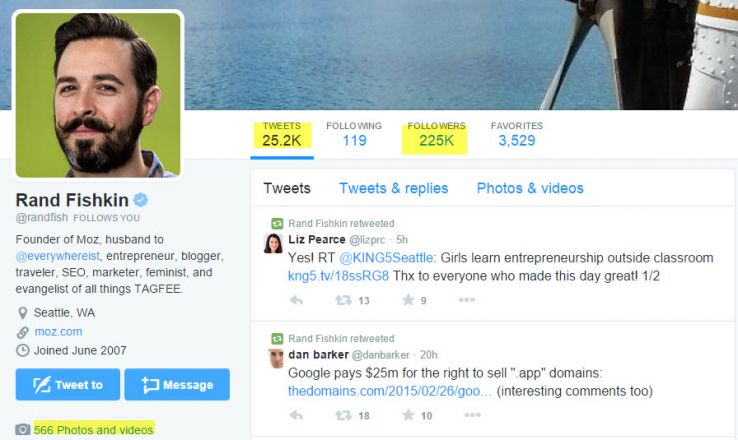 A search for Rand shows the following (h/t to
Barbara Starr for this example of a structured snippet):

Note how Google is taking structured data (highlighted in yellow) from the Twitter profile and including it in the Google search result from the Twitter profile “about Rand”. That data may also be from Twitter’s API of data that they feed to Google. I have noticed that when there are multiple Twitter accounts for the same name, this kind of table data doesn’t appear in the Google snippet.

Getting your structured snippets

The
Applying Webtables in Practice paper has some suggestions on how to create tables that might be sources of structured data that Google might use:

If you decide to use tables on your pages, following these hints from the “Applying WebTables in Practice” paper may help lead to structured snippets showing up in your search results. The inclusion of that data may convince searchers to click through to your pages. A data-rich search result that addresses their informational and situational needs may be persuasive enough to get them to visit you. And the snippet is attached to a link to your page, so your page gets credit for the data.