This post was originally in YouMoz, and was promoted to the main blog because it provides great value and interest to our community. The author’s views are entirely his or her own and may not reflect the views of Moz, Inc.

A hashtag is the wonder of the past decade. It was born to address the need to organize and make sense of the overwhelming social media buzz. Thanks to active and creative user adoption, hashtag support has been added to most popular social media platforms.

This article shows how different social media sites make use of hashtags. Most importantly, it shares some insight into how you can make the most effective use of hashtags for your brand.

There are no hashtag limits (length, number) as long as you keep your message within 140 characters (which is already limiting in itself).

While Twitter hashtags are reported to increase engagement, the most efficient way to use them is through hosting and participating in Twitter chats. Here’s a detailed tutorial on hosting a Twitter chat.

Event hashtags (conferences, festivals, etc.) also work very well on Twitter. You don’t need to actually be in an event to network with people through the official hashtag. Event organizers usually market the official hashtag very well, which means additional exposure for you if you use it.

Twitter search results are ranked by most popular. You can switch to “All” results, which are filtered by date.

You can add up to 30 hashtags to a single photo. You can even tag your photo after publishing it. Simply list your hashtags in the comments. (Note that you can only do this for your own uploads.)

Instagram hashtags
increase your following dramatically, especially if you use hot and trending hashtags.

The best use of hashtags on Instagram is to participate in hashtag games like #tbt and #MondayBlues. Both can make your Instagram posting very consistent (e.g., you have a theme for every day of the week) and increase your following and interactions.) In my experience, people are very willing to click these specific hashtags to see the photos of other participants.

Location-based hashtags also work very well for Instagram. I use both abbreviated and full location names (#la and #losangeles, for instance).

The only official rule for Google Plus hashtag character support is “no spaces”. However, you may have trouble using any characters (which are not letters, numbers or underscore) because Google Plus will attempt to drop them from the linked part of the hashtag.

Google Plus has perceived hashtags differently from the very start. Instead of letting users organize and monitor their conversations, Google Plus hashtags allow for greater exploration of the platform, by Google and users.

This explains why Google Plus updates are auto-hashtagged, meaning that they are added automatically by Google when the topic is clearly discerned.

There are no known limits to the number of hashtags you can add to Google Plus posts.

Google Plus hashtags seem to work great for exposing your updates to a wider range of people. I haven’t found any research to back this up, but I’ve personally seen them work this way. Any time I use hashtags on Google Plus, I see more people outside of my extended circles like and comment on my content:

Unlike Twitter and Instagram, “specific” hashtags (e.g., games, events, and locations) don’t seem to work well on Google Plus. Instead, I try to let Google understand what my update is about by using descriptive hashtags (e.g., #marketingtips).

Google Plus hashtag search results
seem to be ranked by popularity. Moreover, search results are powered by “related” hashtags. Sometimes the result will even miss your initial search term.

Cyfe is the only tool I know of that supports searching and archiving Google Plus hashtag results. 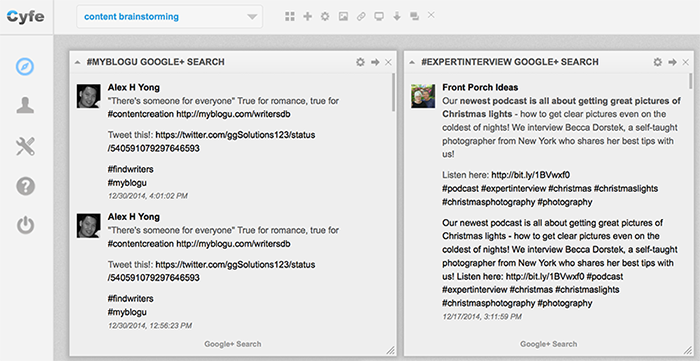 Pinterest hashtags have been quietly supported for some time. “Supported” means the word after the # is clickable (and only in the description).

There are no official rules or limitations on the number of hashtags you can add to a Pinterest post, and Pinterest hashtags seem to support the same set of characters as most other social platforms do. 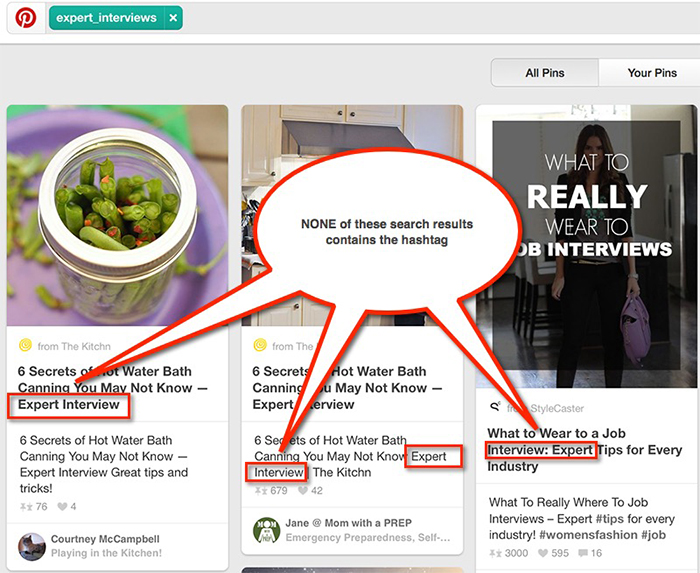 The only reasonable way to use Pinterest hashtags is to use them for branding, especially for cross-promotion (to further spread awareness of your event, Twitter chat, etc.).

Tumblr hashtags work similarly to WordPress tags. They will be linked only in the “tags” field. You can’t create an in-text hashtag by simply adding # in front of a word.

Unlike WordPress, Tumblr hashtags improve the discoverability of your updates across the whole platform.

Here’s a quick example: I am not really active on Tumblr, but I do post random updates from time to time.

I treat Tumblr more as a curation tool rather than a social media network, so I’ve never cared about hashtags or if my updates get any visibility, which they didn’t until I used a few hashtags in
this post. That day I saw a sudden spike in activity on my pretty abandoned Tumblr blog!

[Note: I did nothing special to create the spike. All I did was adding a few hashtags. Seems pretty easy, right?]

You can have spaces, apostrophes, commas, dots, and many other symbols in your Tumblr hashtags.

There are no limitations as to how many hashtags you can use on Tumblr, but only the first five hashtags you use are searchable. Your update will only make it to the search results if it’s an original one, not a re-blog, so don’t bother adding tags if you re-blog.

Any hashtag search will bring up users who recently used those hashtags for you to follow, which means that hashtags are huge for acquiring followers on Tumblr.

Tumblr filters hashtag search results by “most popular” by default. You can switch this to “most recent”.

Furthermore, Tumblr has a “track your tags”
feature which allows anyone to add hashtag search results to their “favorite search”. There are no stats available as to which hashtags are tracked by more people, though.

Flickr allows all sorts of symbols to be typed after the #, but
seems to only link letters and numbers. While serving the same goal (e.g., organizing photos), Flickr tags and hashtags do behave slightly differently. 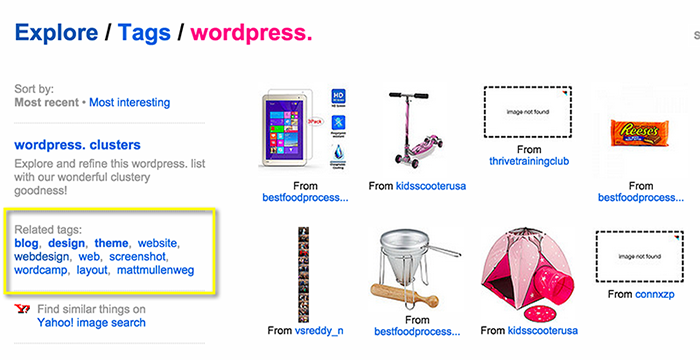 It’s still not quite clear whether hashtags improve visibility on Flickr, or how different they are from tags, which have existed on the platform for ages. The fact that Flickr hashtags were announced and are now proactively supported in the iOS app may indicate that the whole point of a hashtag on Flickr is to make it easier to organize your photos from the iPhone.

There are no limitations as to the number of hashtags you can add to a Facebook update.

Facebook hashtag search is somewhat weird. Try searching for #california, for example. You’ll likely end up landing on a Facebook page instead of a hashtag search results page.

You can also bring up hashtag search results by clicking on any hashtag in your Facebook stream. Facebook’s ranking algorithm is complicated. It seems to be a mix of lots of factors, including how closely you are related to the person posting the update, how often you interact with him/her, how popular the actual update is, etc.

I don’t use hashtags on Facebook beyond random cross-posting from Instagram. I have also seen quite a few of my friends become irritated when someone uses hashtags, so I guess it’s too early to tell. With Instagram’s help, however, hashtags may ultimately become widely adopted by Facebook users.

(All images in this post were created by the author)